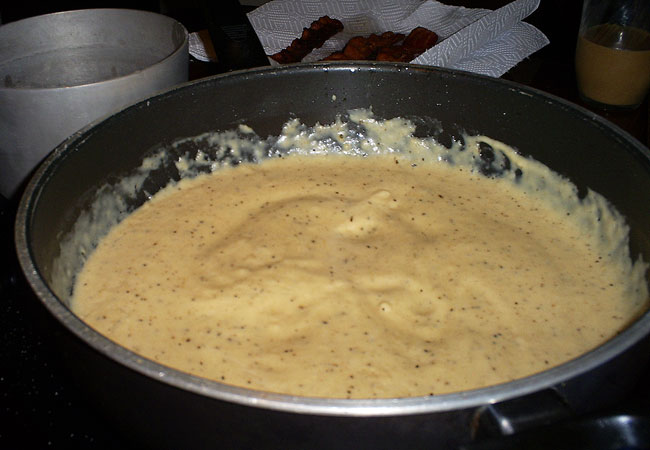 This is Mama Peggy’s gravy recipe as served up at Peggy’s Restaurant in Kings Mountain, North Carolina for almost 30 years. We always eat it by crumbling up some fresh made biscuits and covering them with some warm gravy. But people also ate it with spoon from a plate, and biscuits or loaf bread on the side. Throw in a few pieces of bacon or sausage, and you have a well-rounded Southern breakfast.

My fiance likes sausage gravy over biscuits. I tried to make it and it didn’t turn out very good. Would I use the above ingredients and substitute the bacon with sausage or is there another recipe I should use.
Thanks for you help and I am so glad I found your website. May God richly bless you.
Jean Miles

You can use sausage instead of bacon. Basically the same idea. You’re just using the grease to form the basis of your gravy. Although usually with sausage you set the sausage aside until you’ve made your gravy, but add it back when you’re done. That’s the only real difference, I think.

That is how my family has been cooking breakfast gravy for years! It is the most down to earth way of cooking!

I used this recipe this morning and it turned out perfect! Thank you so much for sharing it.

Perfect!! I so miss my family that has all passed on. I never learned to make gravy. Thank you for these easy instructions. People always just say,”Burn the flour first.” Well I always thought, “What the heck does that mean?” How do you burn flour? You guys are the best!! I really do enjoy this blog. Thank you. I used three cups of milk as I did not have evaporated.