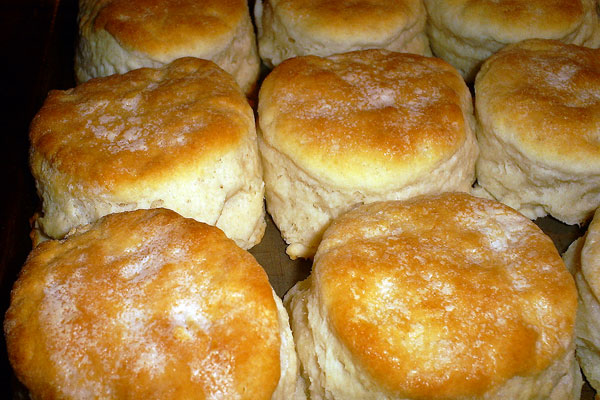 One of Mama Peggy’s most sought-after recipes. Everyone who knew Peggy Chaney still talks about her Southern style buttermilk biscuits. Now you can make your own.

There has been debate in the family about whether or not an approximation of Mama Peggy’s biscuits was even possible or should be attempted. In the end, the recipe arrived at is, admittedly, an approximation. However, it was created by Peggy’s son, Kevin, who worked with her in the kitchen at Peggy’s Restaurant for many years, and who studied long and hard on the problem (and made a good many biscuits trying to get the recipe right).

Kevin’s sole motivation for trying to discover his mother’s biscuit recipe was simple and maybe a little selfish.

“I couldn’t stand the thought of spending the rest of my life never tasting Mama’s biscuits again,” he said.

To the naysayers, Kevin also felt compelled to say, “I ate Mama’s biscuits my whole life. More so, I imagine, than any of my aunts, uncles or cousins. These biscuits taste to me like Mama’s. But I didn’t create this recipe. Mama was guiding me every step of the way. I could almost hear her voice, telling me I needed more buttermilk or that I needed to fold the dough a few more times.”

“Mostly, I just tried to remember what Mama did at the cafe, and trusted her to guide me on the things I couldn’t remember. Of course, no one will ever beat Mama in the biscuit making department. But that’s not what this is about. This is about honoring Mama and having a chance to keep on eating her biscuits. What kind of life would it be without Mama’s biscuits?”

I’ll be expecting a pan of biscuits if I can get down there this summer !

These were fantastic!! I hope I did Mama Peggy justice.
I shared your site on my FaceBook farm page.

This is the best recipe I have ever made. Excellent!!! They remind me of biscuits that a nice lady and friend of the family always baked for me when we visited during my childhood years. I never thought I would taste biscuits like them again. Thank you!!!

Did you forget something? These didn’t raise, didn’t bake? They were dough bombs? I’m always looking for favorites – husband has 3 HA & a quintuple bypass in his history, but both of us are plain biscuit & gravy people. I had switched to oil biscuits – but they weren’t the same. Doable, but not anything to shout about. Seeing this recipe, w/o baking powder, soda or salt was a bright light!
These were beyond dismal – I’m a cook from scratch from 40-50 years, I’ve made biscuits without ever cracking a cookbook or bringing out a recipe card! I baked several dozen cookies in this same oven yesterday, as well as part of today’s dinner…. Cookies were “stellar” according to husband and grandkids. Dinner – sans biscuits – was great!
These biscuits were well beyond lacking!

Sjsmith – Is it possible the recipe failed because you accidentally used “plain” flour instead of the “self rising” flour listed? 🙂

You probably didn’t use self-rising flour, which has baking soda and salt in it already.

Okay Sjsmith, it’s been several months since you bashed Peggy’s recipe for buttermilk biscuits. Since you bashed it, I have filed the recipe over and over again and they are perfect every time. My 7 year old granddaughter just cooked them this morning by herself filtering this very recipe and they were perfect. I myself have been making buttermilk biscuits from scratch for over 45 years without a recipe and this one is great!
You should try to redeem yourself and give the recipe another try.
Good luck.

Did you use self riding flour? If you did it was probably out of date as baking powder is already in the flour and baking powder is only good for a specific amount of time. Even if your flour is not out of date but maybe close to 6 months out of date, I would get fresh flour, be sure to get Self Rising kind.

Sjsmith, sounds like you didn’t use self rising flour to me. Mine turned out light and fluffy.

Can you use real butter instead of shorting???
Would love to make homemade biscuits since my mom can’t anymore

I can’t recall the proportions, but they should be easily located through whatever search engine you use – Google, etc. – but vegetable shortening like Crisco, et al, and real butter aren’t precisely exchangeable, cup for cup.
Crisco is solid fat, without water in it, and butter contains about 15% water in it naturally, plus salt, which would make the dough bake up somewhat oddly soggy. It could also affect the salt balance as well, unless you intend to use what I’ve always called “baking butter” – the unsalted variety.
It’s quite useful for baking, as it has no salt, and doesn’t affect the salt levels in recipes at all, while it’s not very good for eating directly, on toast or hot biscuits, etc.
Another thing about this recipe, is that nobody ever made a law saying all biscuits must always be round! To avoid the excessive handling required when using a round biscuit cutter, (which is required when pushing and kneading all the odd scraps back together to cut more biscuits) simply use a knife with a long blade, and cut the biscuits into squares, after the first kneading (and patting the dough with your hands instead of using a rolling pin) into a large square instead of a circle. Lay them very close together on the pan, barely touching, and bake as they are. No more rehandling which toughness the dough and makes less flaky, less tasty biscuits. I’ve been doing this for ages, and have never gotten less than rave reviews on my biscuits! Try it, and you’ll see what I mean. Its a little quicker too, as once you’ve cut and laid them on the pan the first time, you’re done!

That’s the only thing I hate about old recipes. I haven’t used shortening in years and I don’t want to buy it just for one recipe. All I ever use is unsalted butter. For cooking and for buttering things.

Hi Diana. I’m sure there are lots of different ways to make just about anything. The reason we include shortening in this recipe is because that’s the way Mama made them, and the way she was still making them when she died in 2011. So, basically, this recipe was in answer to the many people in and around Kings Mountain, NC, who wanted to know how they could make Mama’s biscuits.
Honestly, these are labor intensive. With just my wife and I, we rarely ever make biscuits anymore. Not just for the two of us. These days if I get a hankering for biscuits, I’m more likely to just pick up some Mary B’s frozen buttermilk biscuits. But I do hope one of these days to teach my granddaughter to make Mama’s biscuits.

What a wonderful memorial for your precious mom. Blessings to you all and thanks ever so much for sharing this recipe.
I have been hunting for years to find a biscuit recipe that is similar to my Aunt Effie’s biscuits.
Of course as a young girl, never gave a thought as to how she made them.
Blessings.

This is a great and simple recipe. I halved all of the ingredients, followed the instructions exactly, and the biscuits turned out great! Almost reminded me of the ones my Granny used to make. I will probably add a tsp salt the next time I make these. Love this recipe… a real winner! Thank you for posting!

There’s no way to make excellent or even tolerable biscuits without some form of “rising” added to the flour, such as the aforementioned baking powder, baking soda, and/or salt. It just doesn’t work that way. Or, as you said, you get “dough bombs.”
Having said that, even if those ingredients are added to plain flour, the recipe can still fail IF your baking powder (not soda) is too old. One quick way to find out is to take a bit, add it to fresh cold water, and see if it “fizzes.” If there’s no reaction there, then there won’t be in your biscuit recipe either.
Having been raised down South, great biscuits are almost second nature to me. The general recipe proportions I always use for baking powder to flour is at least one tablespoon to 1 cup of flour. Always make sure if your recipe calls for buttermilk, which every decent biscuit recipe should, that it also calls for baking soda. The reaction between the acidity of the buttermilk and the soda is a “secondary riser” to the baking powder.
Also, always make sure that your flour is the right kind – self-rising or plain flour – as called for in the recipe. They are not immediately interchangeable without the additions of the extra rising ingredients not contained in plain flour.
Also, and I rarely see this mentioned, the TYPE of flour, as in the TYPE of wheat it’s made from can make a great deal of difference. Northern flours are generally made from a “harder” wheat than Southern flours, which come from a “softer” wheat. Southern brands of flour are hard to come by in the north, and northern brands rarely, if ever, produce identical results to those made from southern brands. This is one reason why southern biscuits are so much better.

I have read this about the Southern flour before. What brands of flour are Southern?

Mama used to use Southern Biscuit brand when was growing up in North Carolina. I’m sure there are others, but that’s the one which comes to mind. It’s made in Newton, NC. I think you can buy it on Amazon if you really want to try some.

Thank you. I’m assuming King Arthur is not.

King Arthur flour is made in Vermont, I think. Not a Southern brand. 🙂 Other Southern brands are White Lily (made in Tennessee); Midstate Mills is made in Newton, North Carolina; Martha White is out of Jackson, Tennessee. There are bound to be others, but that’s all I can think of right off-hand.

Mine turned out great! My mom makes hers this way. The secret is cold ingredients—cold buttermilk, cold shortening and cold butter—fluffy every time.

Made these today and it will be my go to biscuit recipe from now on. I’ve tried many variations and so far this gave me the fluffiest, softest and crunchiest biscuits. I do have to mention that I added a pinch of salt because of past experience of bland biscuits. I also had to use lard since my vegetable shortening was expired lol. I used White Lily Self-Rising Flour because it’s a must! They came out so good. I got the official thumbs up from my daughter and she’s very picky about biscuits. This recipe was crazy easy. Now off to share it with my mom.

Best biscuits I’ve ever made. And quick and easy too! Thank you for sharing the recipe.

These biscuits are absolutely delicious! They are my go to biscuits unless I am out of self rising flour. Getting ready to make some now! 😋